Mr. E surprised me with a reservation to journeyman after his friend Chef Nathan Gould enthusiastically suggested we give the place a try. What struck me immediately was the appearance of the restaurant. Boxed plants that find their magical way into your dishes adorn the converted garage tucked in the back of an alley. Its high ceilings and open kitchen make you feel like you’re right in the action, particularly if you score seats at the “bar.” 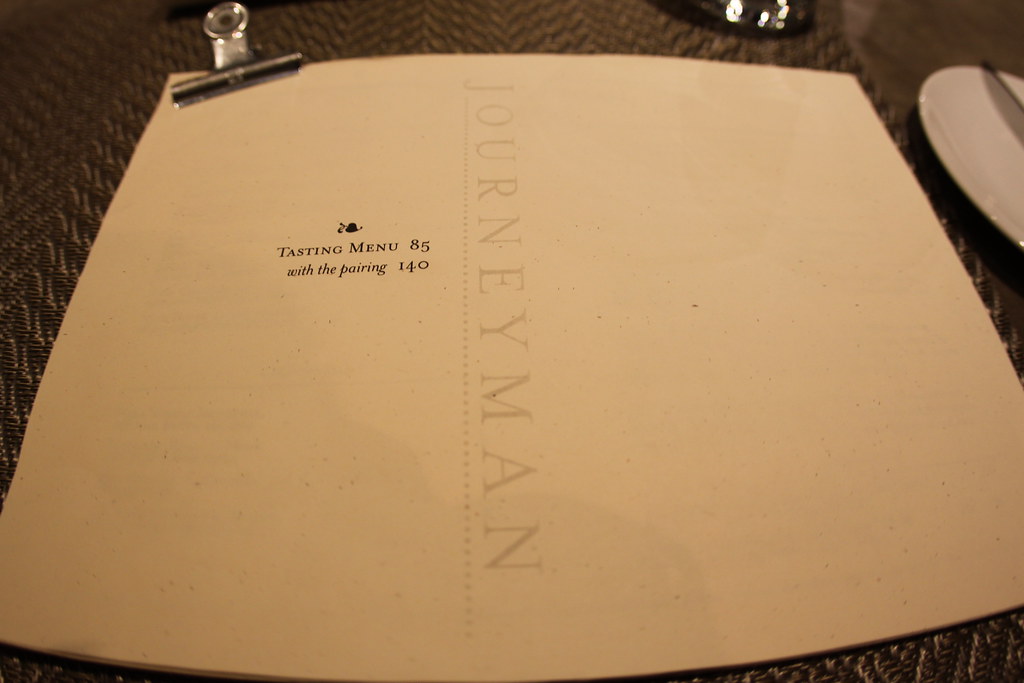 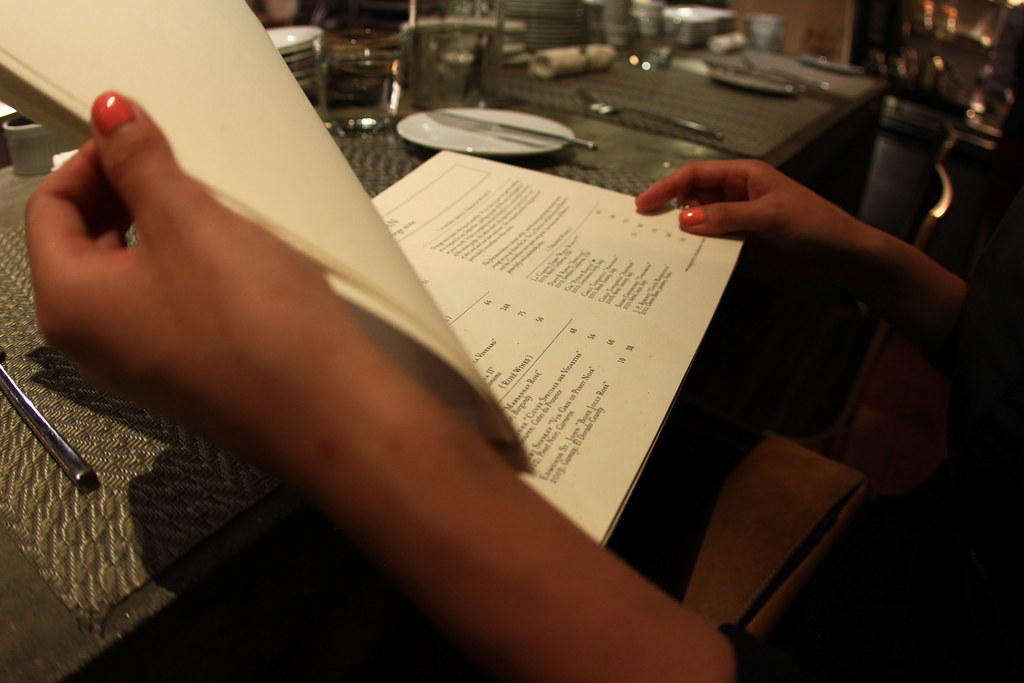 Flipping through my options

No, there’s no mistake when your hostess presents you with a standard clipboard with sheets of cocktails, mocktails, craft beers, spirits, and wines. Journeyman doesn’t give you options foodwise, unless you have allergies like me in which case, those mussels are out, buddy. Instead, you select your beverages or opt for the wine pairing, and leave yourself in those journeymen’s capable hands. 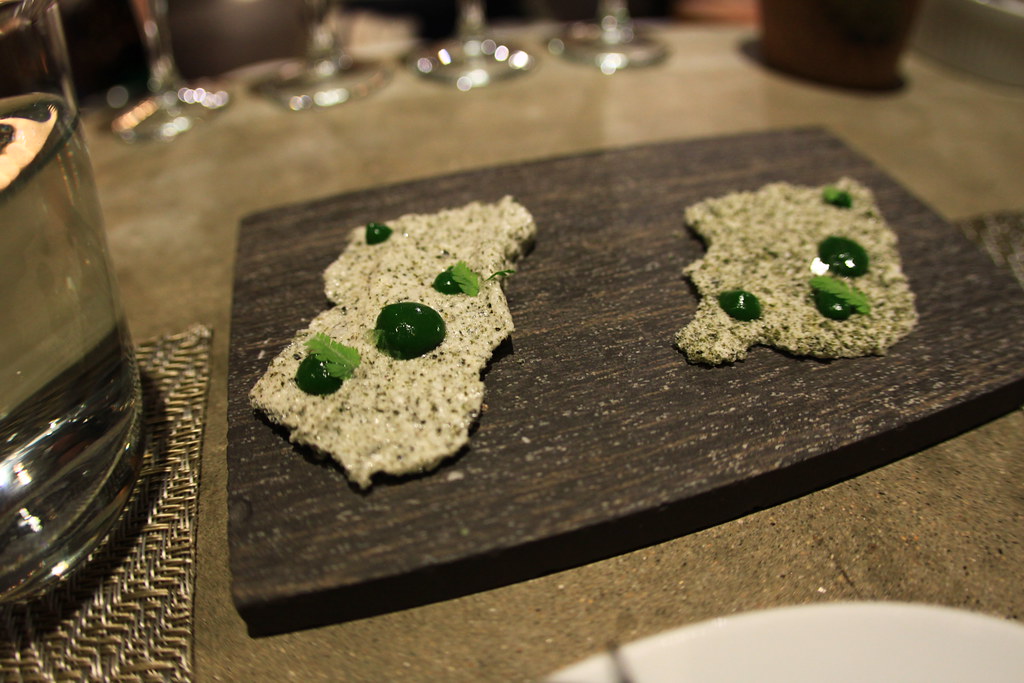 Our meal opened with an amuse bouche in the form of a seaweed meringue crisp. It’s light texture was offset by the immediately intense nori flavor. With peppery and anise greens garnishing the bite, you’d think they’d give the good fight to compete for your tastebuds’ attention. No. Nothing rang as true as that seaweed flavor, making this one seriously seaweed shrimp cracker-esque snack. 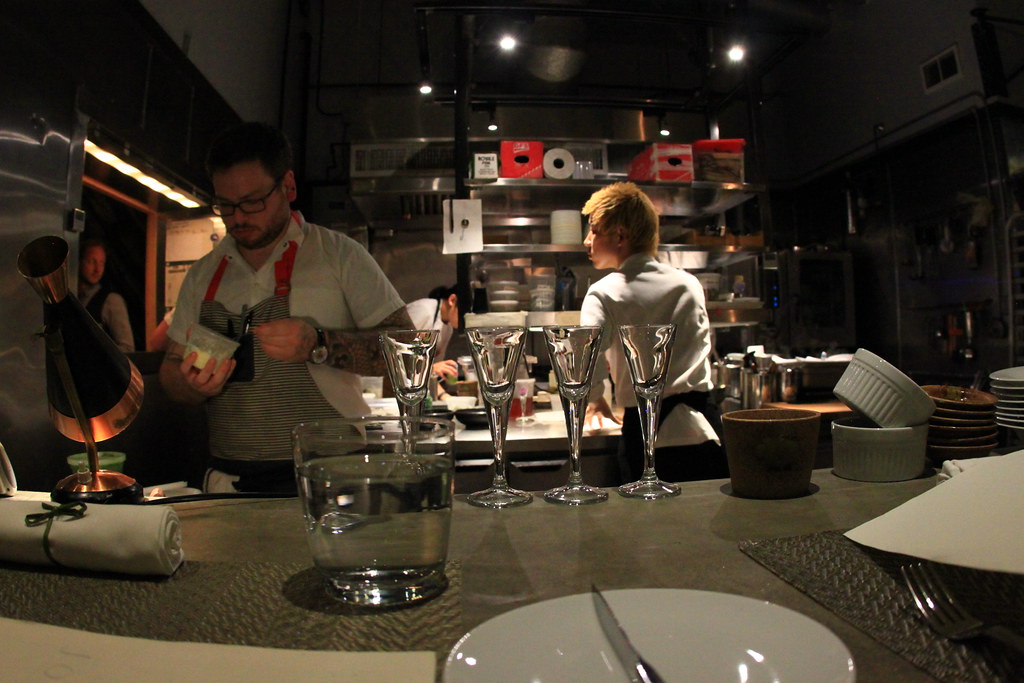 Best seats in the house 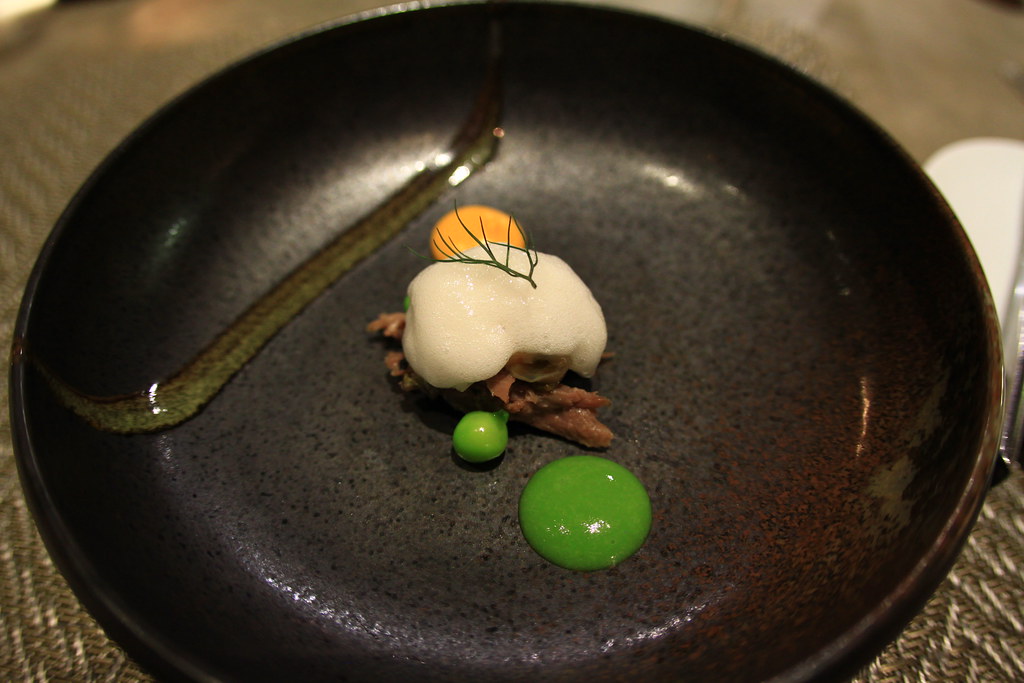 This dish was extremely balanced with all of its Captain Planet like elements of the sea, air, and earth. The purity of the steamed clam and the richness of the duck confit was tied together with a pretty little bow by that sweet pea temptress and her little dill sidekick. My favorite element was the carrot butter. I honestly don’t even recall mixing it with anything because I was godsmacked by my sample taste and blacked out when I spooned the rest in my mouth. 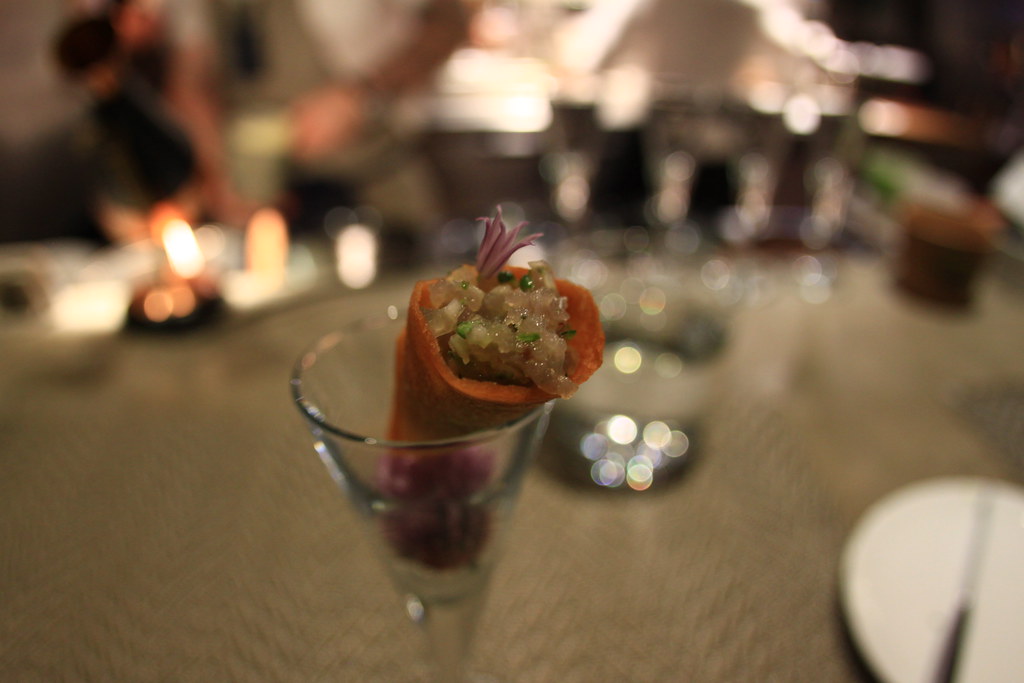 When this little cone found its way in front of me, I sadly compared its looks to the salmon tartare cornet made famous by Chef Thomas Keller at the French Laundry. However, journeyman’s rendition of the dish slashed all comparisons at first bite. I enjoyed the bluefish’s light fishy oiliness post smoke which paired well with the sour pickles. The cornet itself was delicate and added a soft crisp texture to the fish. 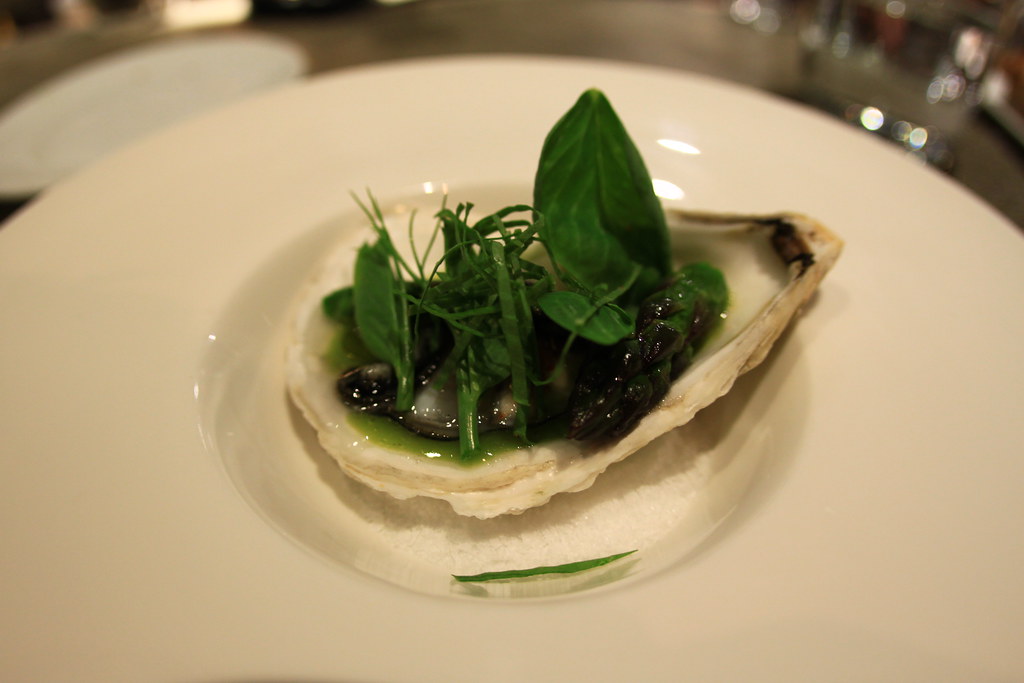 The dish was a true representative of the verdant offerings of late spring. This bite was good, but I brought my own bias to the table for this one. I tend to enjoy oysters in their raw form, so unfortunately it didn’t stand a chance at being my favorite dish. 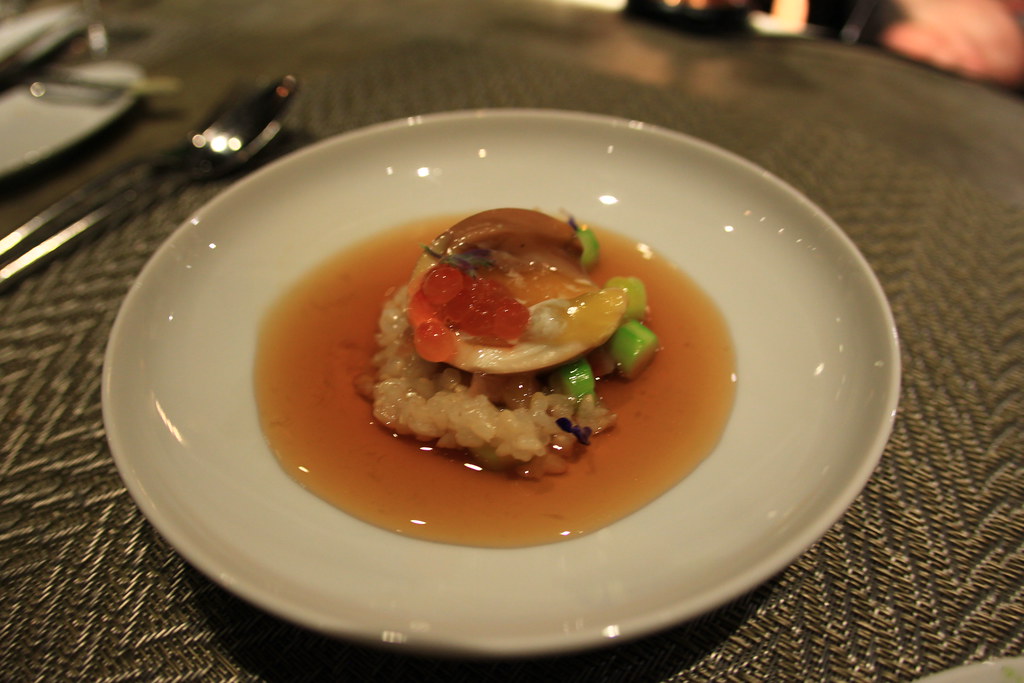 This was the clear winner for most innovative dish. It came with a small pot of tea broth poured table side, which triggered the aromas of the dish. There were a decent amount of dull flavors and somewhat mushy textures going on when you looked at each element separately, but in aggregate were a singularly delicious bite. Man, I love when that happens. 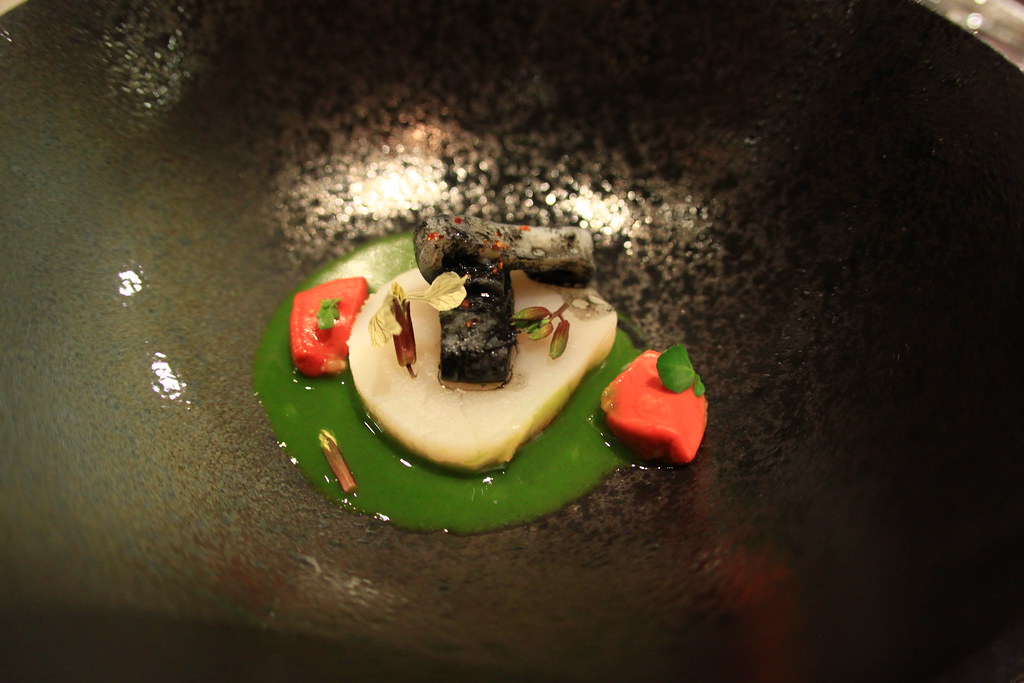 When our server mentioned scallop roe, I had a very different image in my head from what was presented in front of me. The roe, which you see above as those two coral masses, was not in fact the monster egg sack you find inside lobster every now and then. This was one solid mass with no real “eggs” to speak of. The taste is much more intense than the sweet white flesh of the scallop, slightly minerally and brought a whole lot of umami to the table. This in combination with the smokiness of the squid made for a very balanced dish. 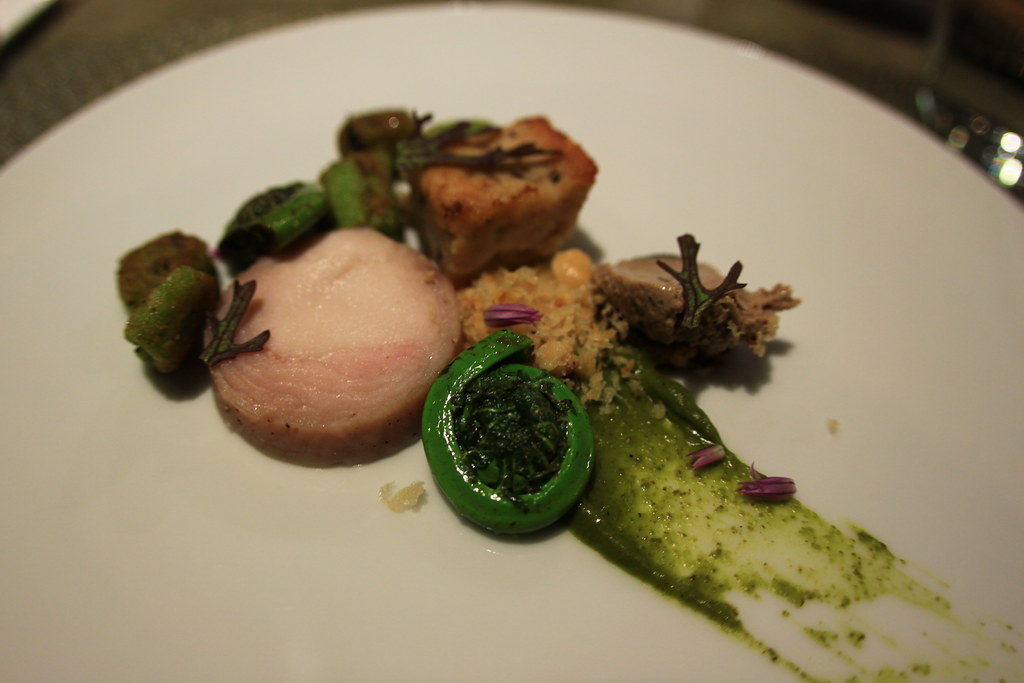 This was my favorite dish of the meal. It was simple and straightforward. I love bells and whistles, but sometimes I just want to eat some rabbit and greens. The rabbit in all forms was delicious with the liver mousse taking the grand prize. The fiddleheads were a nice touch. Nothing is more earthy than fiddleheads, which I’ve always thought tasted a bit like a bitter dirty asparagus… but in the best way possible? Clearly, fiddlehead farmers wouldn’t hire me as their spokeswoman, but I do love a good fiddlehead. 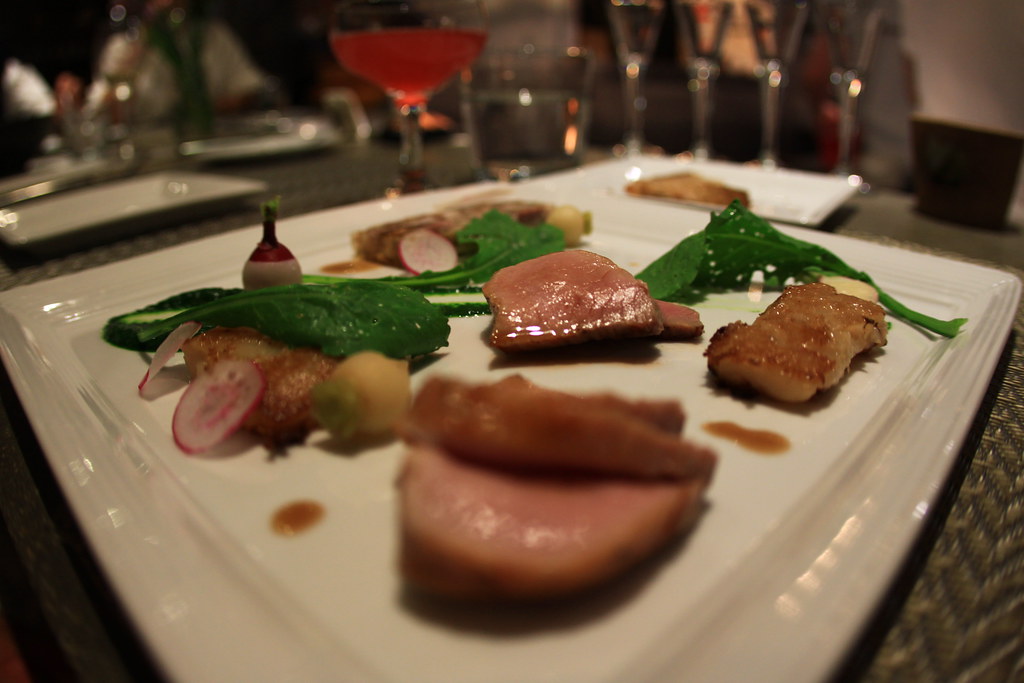 There were a lot of really nice elements to this dish. To get one thing out in the open, radish is by far my favorite root vegetable. This little sucker tried to take me down when I was mere two year old and nearly choked me to death – when you’re two and you love something, sometimes inhaling/swallowing whole is the fastest way to satisfaction right? My dad saved me and then I got back on the horse and started popping whole radishes again like the bad mama jama I am. The fact the Journeyman paid a nice tribute to the classic turnip cake you see at dim sum warmed my soul. Also, the fact that someone would butter dip my favorite crunchy treat was like a big bear hug. If I thought any more about it, I’d probably start crying. The pork loin was good and the headcheese was a knockout. If you’ve ever felt a little fearful of eating headcheese, don’t. The pigs head contains a lot of very tasty morsels. If you can get over the hump and just go for it, you’ll probably really enjoy it! 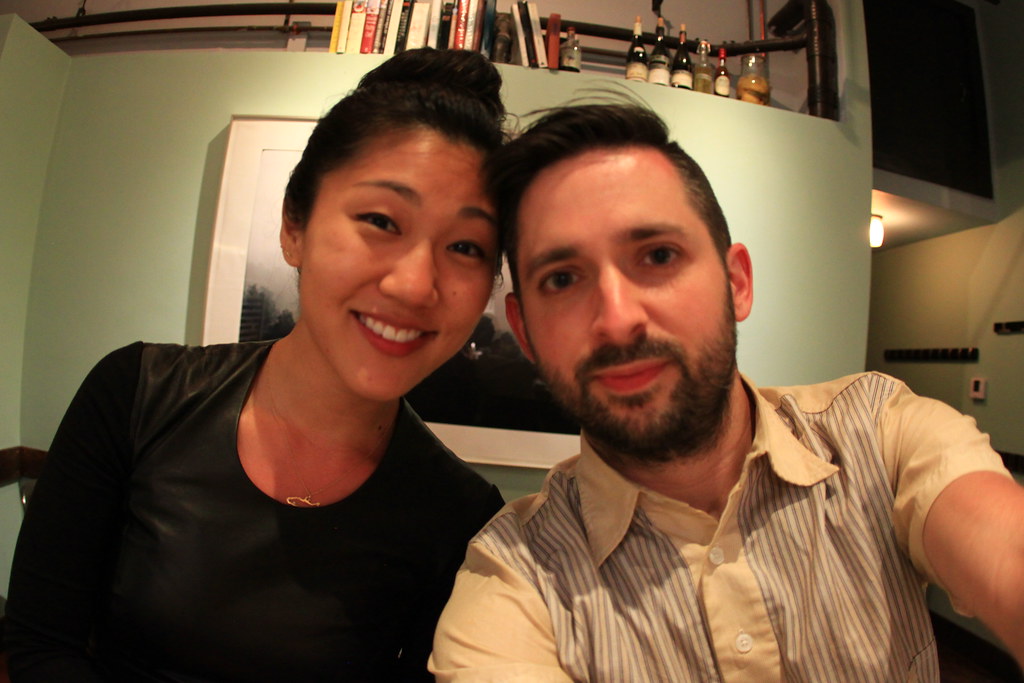 Oh hi there. At this point, we are already pretty full! 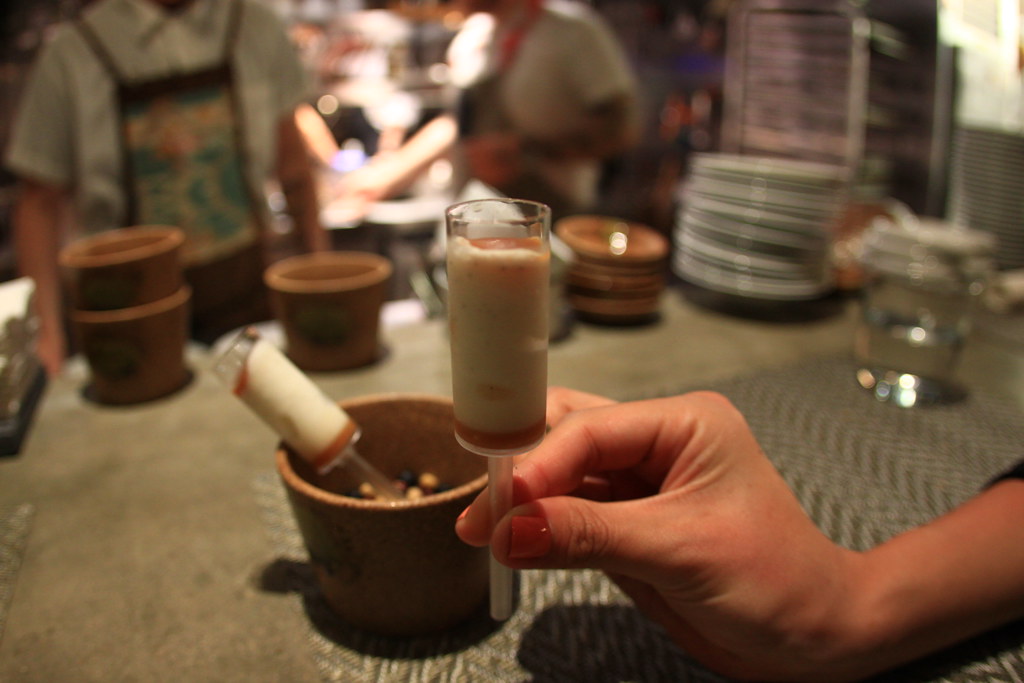 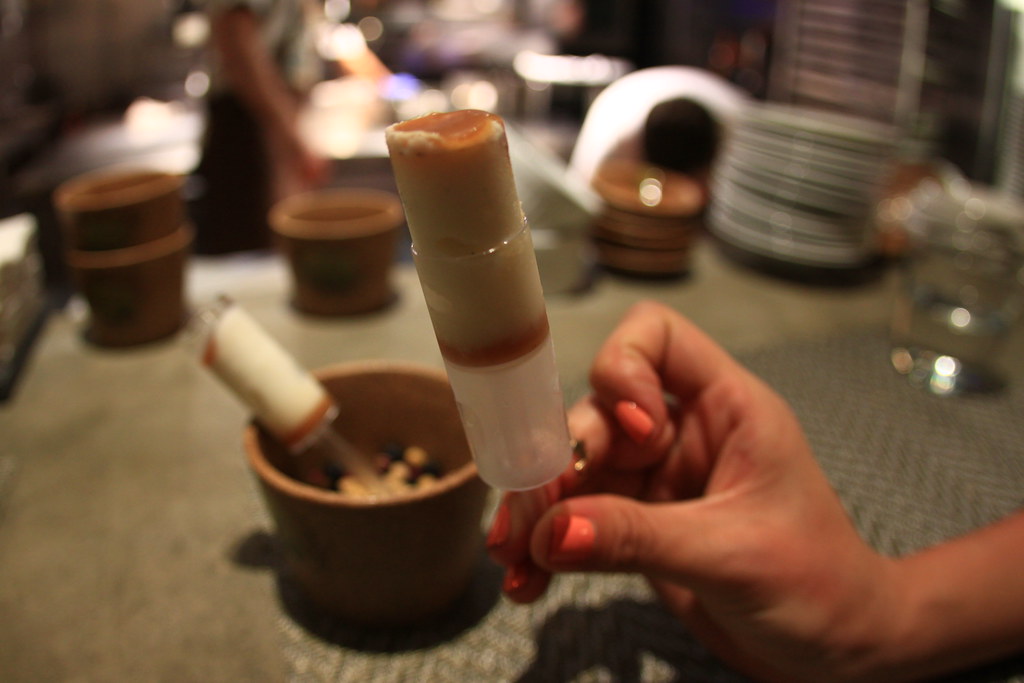 I mean, come on. Did you just read those words? A friggin push pop!! These were so adorable, it pained me to eat these. These were a perfect segue to our full own dessert. Excellent little tangy cold bite. 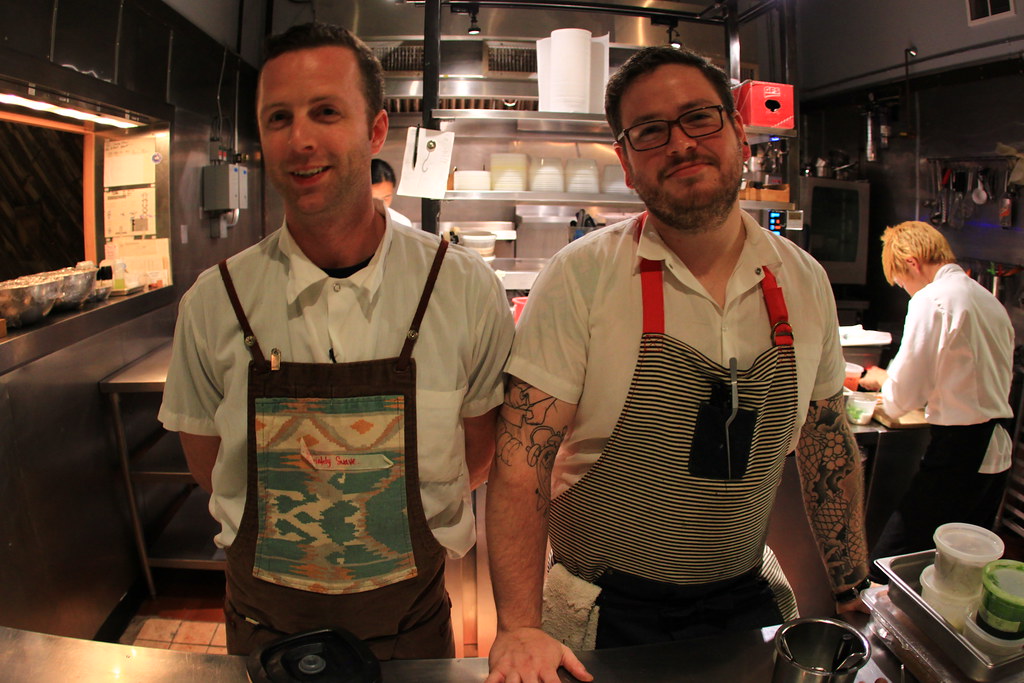 Kelvin and Ben, two of our masterful chefs for the night 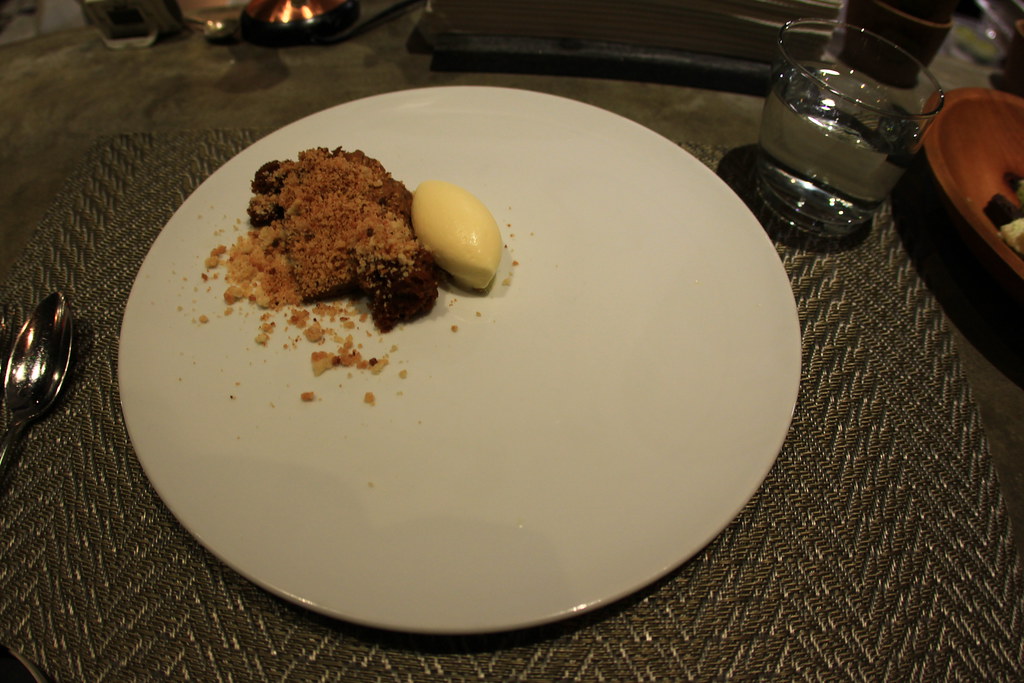 I had my doubts when I heard chicory, coffee, and soy sauce. It sounds like some nightmare basket from Chopped. Journeyman pulled it off. No flavor came on too strong or overwhelmed the other. It was a strange symphony that still has me scratching my head. 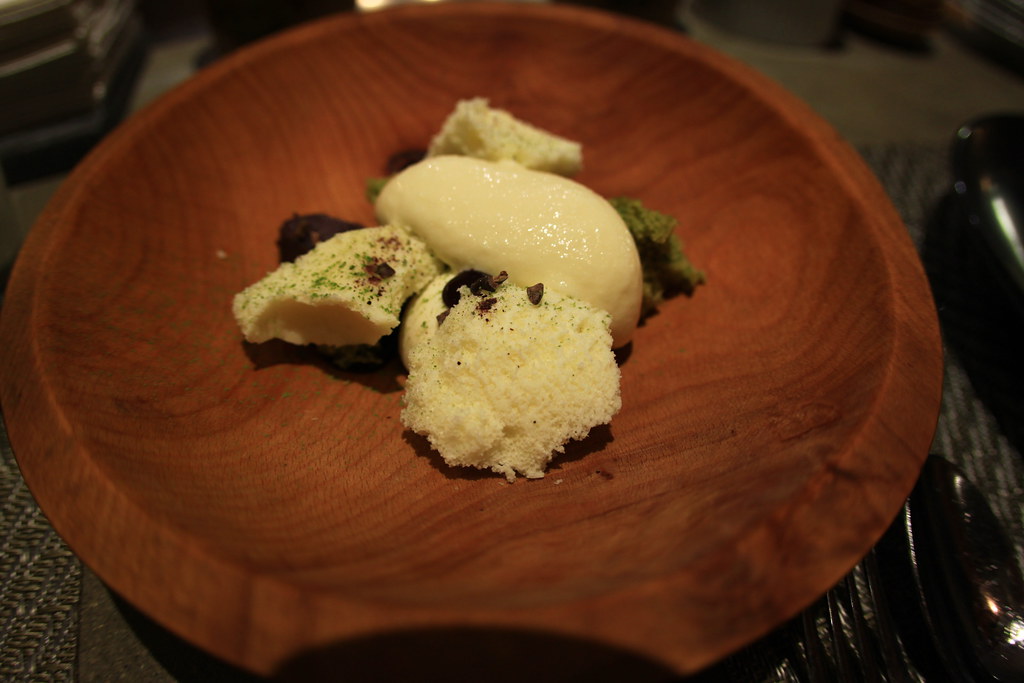 This dish had very good texture. The black rice in particular created a nice mochi like chew. Aside from the pretty original move to add black rice to a dessert, there wasn’t anything special about this one. 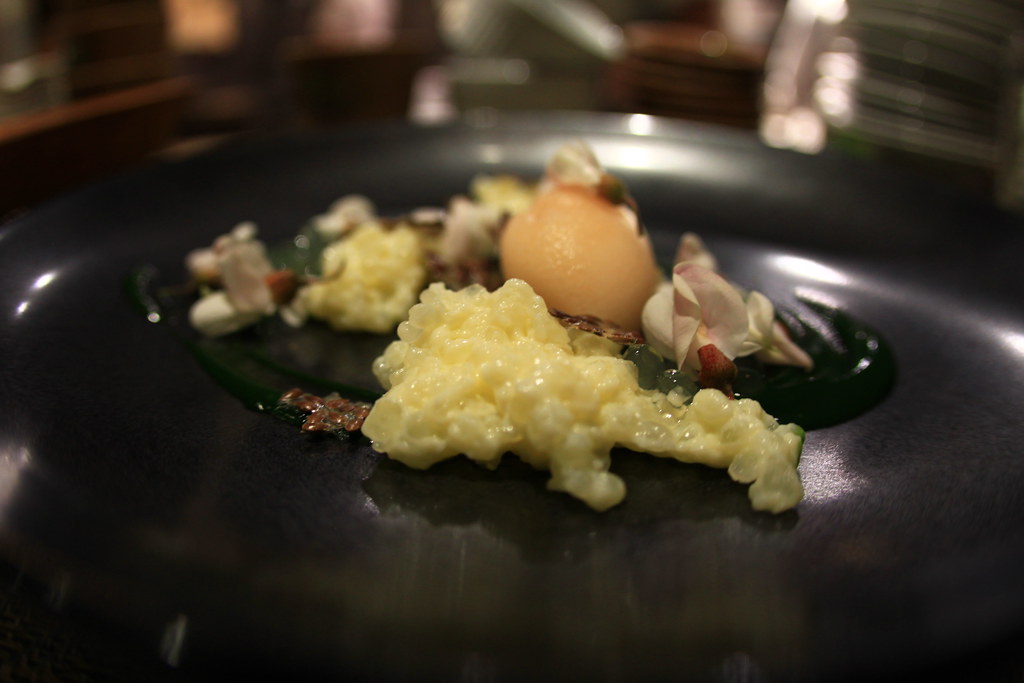 I stuck my nose in this one. Mint, grapefruit, elderflower. There were a lot of strong fragrant ingredients in this dish… and flavor packed for sure! Mr. E and I loved the grapefruit sorbet. He described it best — “like eating a grapefruit without all of the obstacles.” The tapioca and the flax brittle added a nice contract to one another and the addition of the flowers were a surprise. I’ve never eaten an locust before. They were floral and heady, contributing just enough pizzazz to a light crisp dessert.

Of course, we also had a few items that got gobbled up prior letting Mr. E snap some photos. We took advantage of the optional cheese course before dessert after being easily swayed with some sexy, cheesy adjectives. We also had some treats after the generous three desserts including a really beautiful financier, sable, cardamom and sesame caramels, and a refreshing elder flower and raspberry macaron.

This was such a lovely experience. I couldn’t thank the restaurant staff and chefs enough, particularly after they generously brought us all of their dessert offerings. There were a lot of inventive bites with playful elements of molecular gastronomy and offal. While I can appreciate a good tasting menu, it’s a shame that I can’t just pop in for a quick bite without all of that commitment. Regardless, on the car ride home Mr. E excitedly told me we are going at least once a month. Hungry for more? You bet I am.